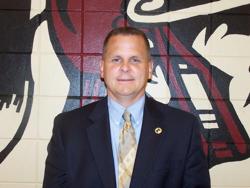 Brad Skogerboe will be entering his 14th year as the Activities Director at New Prague High School during the 2021-2022 school year.  The Sherburn, MN native was a 1987 graduate of Sherburn High School and a 1992 graduate of Mankato State University with a B.S. in Life Science Education and Coaching.  In 2002, he received his MEd in Sports Management from the University of Minnesota and also earned his K-12 Principal Licensure from St. Mary’s University in 2007.  Skogerboe has since earned his Certified Athletic Administrator (C.A.A.) certification in 2010 and his Certified Master Athletic Administrator (C.M.A.A.) certification in 2016.

Cory Warner will be entering his 1st year as the Assistant Activities Director at New Prague Area Schools during the 2021-2022 school year. Cory is from Elk River, MN and is a graduate of Concordia University Saint Paul. Cory received a Bachelor of Arts degree in Sport Management as well as a Minor in Coaching.  While at Concordia, Cory ran both Cross Country and Track and Field all four years. He was a captain for both of those teams for 2 of those years. During his time at Concordia, Cory worked 2 years with the athletic department as well as coaching one season of Track and Field at Elk River high school.

After graduating in the spring of 2020, Cory went on to work at Scheels in Eden Prairie where he was a shoes salesman as well as managed the women's shoes department. Cory and his Fiancė, Lydia, will be moving to Bloomington this fall. He enjoys the outdoors and being around friends and family. Cory is an avid bag’s player and plays men's softball in the spring and summer months.

Cory is looking forward to joining the New Prague Activities Department and is very excited to work with students to have the best experience possible during their time at New Prague High School. 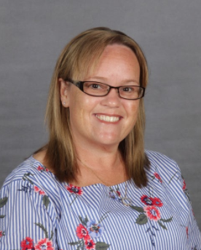 Julie Schlup is entering her first year as the Activities Office Assistant position at New Prague High School.  She is a native of Orange, California.  Julie worked at Disneyland for 15 years in the Transportation Department as an Administrative Assistant before moving to Minnesota in 2008.

From 2016-2021, Julie was the 7-12 Activities Administrative Assistant for Tri-City United High School. Julie and her husband, Brian, reside in New Prague. She enjoys vacationing with family in California and Tennessee.  She also enjoys relaxing at the lake fishing with her husband Brian.

Julie is excited to be part of the New Prague Activities Department and looks forward to helping the New Prague High School students and parents/guardians have a positive experience with activities and athletics during their time in high school.